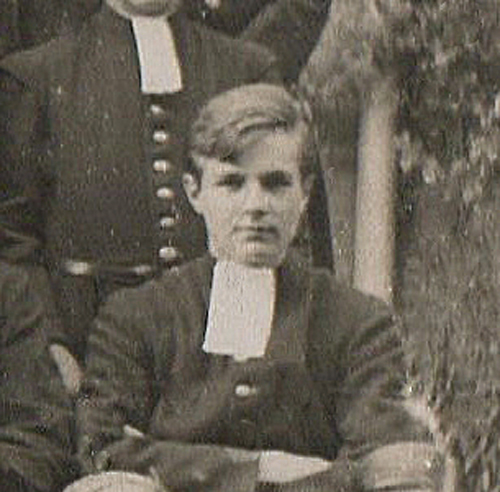 1912
Born in Selsey Bill, Sussex, in rented accommodation called ‘The Nook’ above the High Street post office. Difficult early childhood after his father left the family. Moves to North London.

1921-30
A boarder at Christ’s Hospital, Horsham, where H. A. Rigby, the art master, provides his only formal art training. Encouraged to discipline and extend his talents and foster an interest in Frank Brangwyn, whose murals adorned the school chapel. Wins school prizes for art and holds first public exhibition.

1931-8
Works at Lintas advertising agency. Meets artists Felix Kelly and John Pasmore. Leisure hours occupied by music and ballet and painting in  his spare time. Discovers modern art and makes first direct acquaintance with the Impressionists and Post-Impressionists. Admiration for Cézanne and Picasso. During the late 1930s spends weekends at Pagham with friends, sunbathing, swimming and playing on the beach. Takes many photographs in which friends appear frozen in movement, in gestural poses and groupings that subsequently appear in his mature paintings, most notably the ‘Assembly’ paintings. Pre-war visits to Germany and a visit to Paris (1937).

1939
Leaves Lintas. Spends a year painting in the country. First real involvement with oil paint. Commences his colossal journal, which he keeps until his death, charting his emotional, creative, psycho-sexual thoughts and activities.

1941-6
A non-combatant in the army, stationed at Wiltshire then Malton in Yorkshire. Works as  a clerk and German interpreter. Produces highly charged gouaches and ink drawings depicting landscape and army life. Contributes to Penguin New Writing and is invited to show drawings in a war art exhibition at the National Gallery. Meets Sutherland and other Neo-Romantic artists (Minton, Ayrton, Craxton, Colquhoun, MacBryde and life-long friend Prunella Clough). First solo show at Reid  & Lefevre, London (1944). Brother, serving in the RAF, killed in action over France and produces the photographic album Dick’s Book of Photographs in response. Virtually no oil painting during the wartime period since army duties preclude studio work and large-scale painting.

1946-8
The Picasso/Matisse exhibition at the Victoria and Albert Museum suggests ways forward from his Neo-Romantic allegiances. Teaches at Camberwell School of Art and initiates notable technical and conceptual developments as he works consistently and seriously with oil paint for the first time.

1948-1952
Shares a house with John Minton in Hamilton Terrace. Begins teaching at Central School of Art. Spends holidays in France and Italy looking at large- scale fresco compositions in preparation for painting the vast, central mural in the Dome of Discovery for the 1951 Festival of Britain. Paints First Assembly of Figures. Moves to Belsize Park where he lives until his death. Develops an awareness of the painted surface as an important element in itself. First sight of work by Nicholas de Staël (Matthiesen Gallery), points the way both towards reconciliation between figuration and abstraction, and towards eloquence and sensuality in his handling of oil paint. Holidays spent in Ireland, Northern England, Scotland, Cornwall, France and Spain, all of which contribute to a growing interest and productivity in landscape painting.

1956
Paints Third Assembly of Figures (Harvest Assembly) and four ‘Lazarus’ paintings (1956-9). Makes his first contact with American Abstract Expressionism, which he finds conceptually disturbing but which proves to be an important technical influence.

1959
Travels to the USA, visiting Iowa, Chicago and Mexico. Appointed resident painter at Iowa State University. Receives much-needed stimulation from colleagues and students. Produces a series of dynamic winter landscapes. Travels to Mexico, which inspires some important, large-scale paintings. The direct contact with Modern American art and American optimism helps promote a notable gain in freedom of his subsequent painting. Joins the staff of the Slade School of Art. Visits Essex and makes his first paintings of the landscape there.

1960
Holds an important exhibition at the Matthiesen Gallery. Visits Venice  and Greece, travels to the Cyclades and throughout the Peloponnese. A predominance of blue and other open areas of colour, appears in his paintings as a result of his encounter with the Aegean Sea. Painting becomes looser and more abstracted and gains in technical variety. Commences a series of dense but subtle charcoal drawings under the influence of his student Mario Dubsky.

1961
Travels to Wales, Scilly Isles and St. Ives. Produces paintings based on these visits, and the previous summer, in Greece. First large-scale paintings in which several figures are fused as ambiguous entities. A preponderance of reduced and abstracted arrangements of forms, in which the figures begin to also coalesce with, and dissolve into, the surrounding setting. This formal consideration becomes a major preoccupation for the next decade.

1962
Has a major retrospective exhibition at the Whitechapel Art Gallery, London, curated by Bryan Robertson. Paints Sixth Assembly of Figures.

1963
Paints an important, large-scale mural for the Aboyne Estate Clubroom, Wandsworth – a commission from the London County Council, who later destroy it. Exhibits a series of drawings at Bienal de São Paulo.

1964
Paints Seventh Assembly of Figure (Nile Assembly). Paints Eighth Assembly of Figures (Orange Assembly). Awarded an Honorary Fellowship by the Royal College of Art. Buys Harrow Hill Cottage in Essex and divides his time between weekdays in Belsize Park and weekends in the country; works in studios at each location. Makes extensive use of both drawing and photography throughout this period to provide visual information for paintings. Subjects include friends bathing in his garden swimming pond and the Essex landscape.

1965
A visit to Morocco in April significantly affects his subsequent use of colour and subject matter. Hotter, warmer hues emerged as a result. A second visit to Greece. Much of this experience finds its way into his paintings, gouaches and photography. Makes further reductions in formal qualities of his compositions, especially in his gouaches. Awarded the CBE.

1965-77
Continues to live and work in London and teach part-time at the Slade. Longer periods spent in Essex; the landscape there becomes increasingly important from about 1968 onwards.

1966
Publishes extracts from his private journals in an edition entitled, Keith Vaughan: Journals and Drawings. Makes clear his sexual orientation a year before the decriminalization of homosexuality.

1969-1970
Makes further visits to Greece and produces a series of photographs of bathers on the beaches in Corfu and Paros, extending his interest in this theme.

1974
Exhibits gouaches at Victor Waddington Gallery, London. Continues to struggle with the relative merits of figuration and abstraction, issues that had troubled and unsettled him for twenty years.

1975
Incapacitated through kidney and liver problems, which lead to cancer treatments and a colostomy operation. Suffers severe depressions and dependency on various barbiturates and alcohol (details of which he recorded in his journals). Unable to sustain creative activity for long periods. Continues to teach part-time at the Slade and convalesce at Harrow Hill Cottage in Essex. Begins the process of re-reading and clarifying passages in his journal.

1976
Holds his final exhibition at the Waddington Galleries and shows new oil paintings and gouaches. Paints Ninth Assembly of Figures (Eldorado Banal), the last of his Assembly series, as a statement concerning his exclusion from, and incompatibility with, many of the recent developments in British painting. The exhibition travels to Tib Lane Gallery, Manchester and Compass Gallery, Sheffield. Paints Elegiac Landscape, his final major oil painting, in response to his mother’s death. Works on a series of drawings that he calls his Grafitti [sic] Drawings.

1977
Spends his final year coping with deep depressions and serious illness. Produces intermittent work on paper and also occasional pencil drawings. Over the course of the year receives counseling and assistance from his old friend and doctor, Patrick Woodcock. Decides how and when to terminate his life. Dies on November 4, in his studio while writing in the journal he had commenced in 1939.