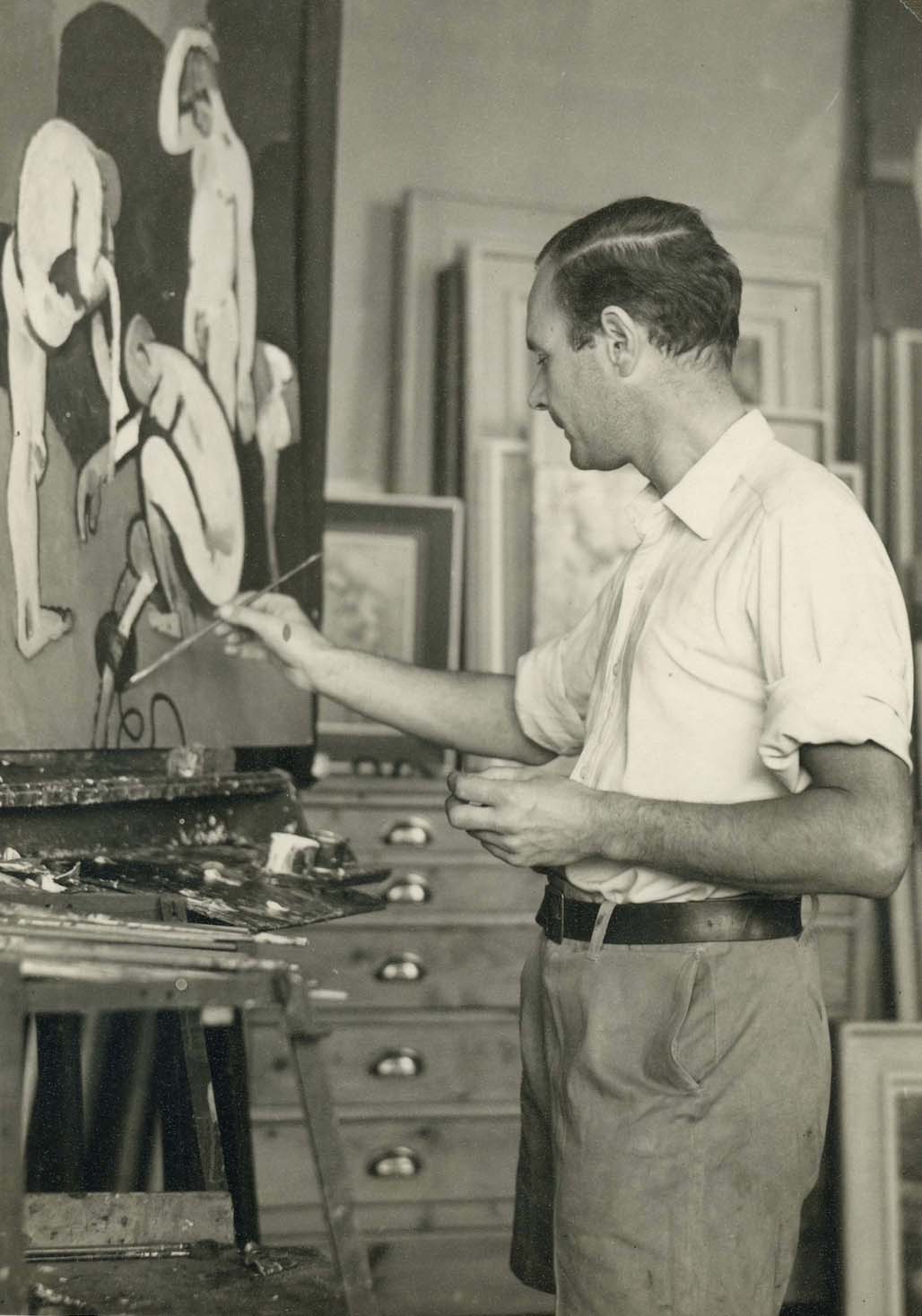 Over the course of twenty-five years Vaughan produced nine major paintings to which he applied the title ‘Assembly of Figures’. The first dates from 1952 and the last was completed one year before he died, in 1976. He also produced a series of other related works, such as Small Assembly of Figures (1951-53), Small Red Assembly (1963), Blue Assembly of Figures (1964) Dark Assembly (1964) and Red Assembly (1964), which are variants on the theme. To this list we can also add the large Crowd Assembling I and II (1967 and 1968). All these works are painted in oil and are generally painted on canvas, though occasionally other supports, such as cardboard and soft-board are used. A few related ‘Assembly’ gouaches and drawings also exist.

The ‘Assembly’ paintings share certain pictorial characteristics. For example, the protagonists are invariable male and are presented to the viewer nude or semi-nude. This makes identification of the individual, his social class or profession, impossible to ascertain. The settings are beachscapes or semi-abstracted landscape environments, whereby figure and location are melded together into a coherent, plastic vision – despite few specific clues to indicate where, in particular, they are. Nor can we interpret what precise activities the figures are engaged in, or what the purpose of their coming together might be. Vaughan does not help matters by distilling facial features and disguising genitalia; he considered these anatomical details to be ‘the attention grabbers’ and thought they exerted a considerable pull on the eye of the viewer. Gestures are generally of an anti-dramatic type and psychological expressions are virtually non-existent. The lack of narrative clarity is intentionally restricted to engender pictorial ambiguity and generate a quality of enigmatic uncertainty.

One may presume these congregations of nameless individuals, at the mercy of the elements, characterize aspects of mankind in general – naked, vulnerable, sluggish and awkward in forging both personal relationships and social associations. A reading of Vaughan’s confessional journals indicates that these are quasi-self-portraits and the paintings are investigations concerning his own position in and relationship to, the world. Moreover, being so close to the picture plane and proximate to the viewer, we might imagine ourselves to be a member of one of these groupings, gathered only a step or two away from us.

Vaughan’s ‘Assembly’ paintings were periodic summations of his technical progress, as though he set himself the task of composing a more complex pictorial essay after a period of development. In the early versions we see him quoting previously used poses and gestures. He organized and arranged his compositions with painstaking care, often making highly finished gouache studies on paper ahead of tackling the full-scale work. These meticulously squared-up miniatures were then transferred to the canvas before the oil painting process commenced.

Studio notes and articles written by Vaughan and others add to our understanding of the ‘Assembly’ paintings.The notes presented here have been compiled over several years and hopefully offer some useful clues as to how we might interpret or approach Vaughan’s Assemblies of Figures.

Keith Vaughan: ‘Painter’s Progress’, Studio, August 1958
These compositions rely on the assumption (hard to justify perhaps, but none the less real to me) that the human figure, the nude, is still a valid symbol for the expression of man’s aspirations and reactions to the life of his time. No longer incorporated in the church or any codified system of belief, the Assemblies are deprived of literary significance or illustrative meaning. The participants have not assembled for any particular purpose such as a virgin birth, martyrdom, or inauguration of a new power station. In so far as their activity is aimless and their assembly pointless they might be said to symbolize an age of doubt against an age of faith. But that is not the point. Although the elements are recognisably human, their meaning is plastic. They attempt a summary and condensed statement of the relationship between things, expressed through a morphology common to all organic and inorganic matter.

The Guardian 23.3.1962
They are noble enough, like Homeric Greek warriors taking an afternoon off for a bathe out of range of Trojan archers, but they are engaged on no dramatic human activity, nor are they capable of conversation or ambition. They stretch out their arms or raise their legs to prove their virility but their home is the gymnasium or by the seashore.

The Times 26.3.1962
His principal achievement is to be found in the ‘Assemblies of Figures’ in which there is often a haunting kinship (though no obvious resemblance in style) with the Bathers of Cézanne…

Keith Vaughan: Journals and Drawings 1939–1965, 1966
Some Notes on Painting, August 1964:
I would like to be able to paint a crowd – that abstract entity referred to by the sociologists as the masses. An amorphous compressed lump of impermanent shape reacting as a mass to environmental stimuli yet composed of isolated human egos retaining their own separate, incommunicable identities. In the past artists have usually dealt with the problem of crowds by turning them into assemblies. Assemblies are orderly rhythmic groups of individuals which act and are acted upon by mutual consent. The behaviour of an assembly is at least compatible with that of any member composing it and often surpasses him in achievement. The behaviour of a crowd follows its own laws and generates its own energy. It is inferior, humanly speaking, to any one member composing it and usually acts contrary to his interests, and can even accomplish his destruction.

Keith Vaughan: Studio International, November 1964
There are fewer single figures, but crowds making a single, corporate form – crowds, masses, unidentifiable crowds. Before, I made assemblies of figures, people making studied gestures to each other. Or single melancholic figures. Now I am trying to combine the two things. How do I reconcile this with the idea of isolation? They’re not happy masses, they’re in a panic state of conflict…

Keith Vaughan: Foreword to Journals and Drawings 1939–1965, 1966
With the more subjective artist it is usually impossible to express the same experience in different media. The reason for this may lie in the fact that the original experience takes on a new reality the moment it is translated and becomes an inseparable part of the medium in which it is handled…An example of this is the series of photographs I took just before the war of groups of nude figures posed in action against a background of empty sky…It was only in 1962 when I happened to show them to Bryan Robertson that it was immediately apparent to him that this was the source or one of the sources of the Assemblies of Figures on which I was working during the fifties and sixties. Confronted with this proposition it seemed to me obviously true, though at the time I was painting I had no conscious recollection of the situations and never referred to the photographs. To me they existed only in connection with the technical possibilities of photography in which I had been interested at that time.

Keith Vaughan: Retrospective, Mappin Art Gallery, Sheffield, 1969
Catalogue Note by Dr. Gordon Hargreaves:
From single figures, or groups of figures engaged in everyday activities, assemblies of figures have developed in which each appears mysteriously isolated while making formalised gestures to the others. These monumental groups have recently given way to paintings of crowds, in which the individual scarcely exists except as a component limb or organ of that super-organism, the crowd. The landscape has rarely existed just as a setting for the figures it contains, but has been integrated with them; in many cases, it is difficult to define just where the figure stops and the landscape begins. These interactions between human beings, and their interactions with their environment, form the overt theme of Vaughan’s work. Considering only the subject matter of the paintings, one may read that the contact between human beings is necessary for continued meaningful existence.

Professor John Ball
Undated Notes c. 2007:
…it is useful for us to use the Nine Assemblies as focal points round which to organise our understanding of Vaughan’s progress. He himself certainly regarded them as special, thought of them as summations of his work to date. In general, they are marked by presenting several figures, grouped as if poised for some action, but Vaughan was always at pains to deny any narrative content, and to emphasise that they were assembled for no particular purpose. He was not entirely consistent in using the title ‘Assembly’. The Fifth (‘Two Figures in Sequence’) has only two figures; the Third (‘Harvest Assembly’) shows a group of farm workers assembled for the harvest, while the Ninth (‘Eldorado Banal’) has a narrative content in that it is derived from Baudelaire’s poem ‘Un Voyage a Cythère’ and shows some of the characters and actions from the poem. Several smaller pictures could indeed be called Assemblies and Vaughan did use the title ‘Small Assembly of Figures’ more than once.