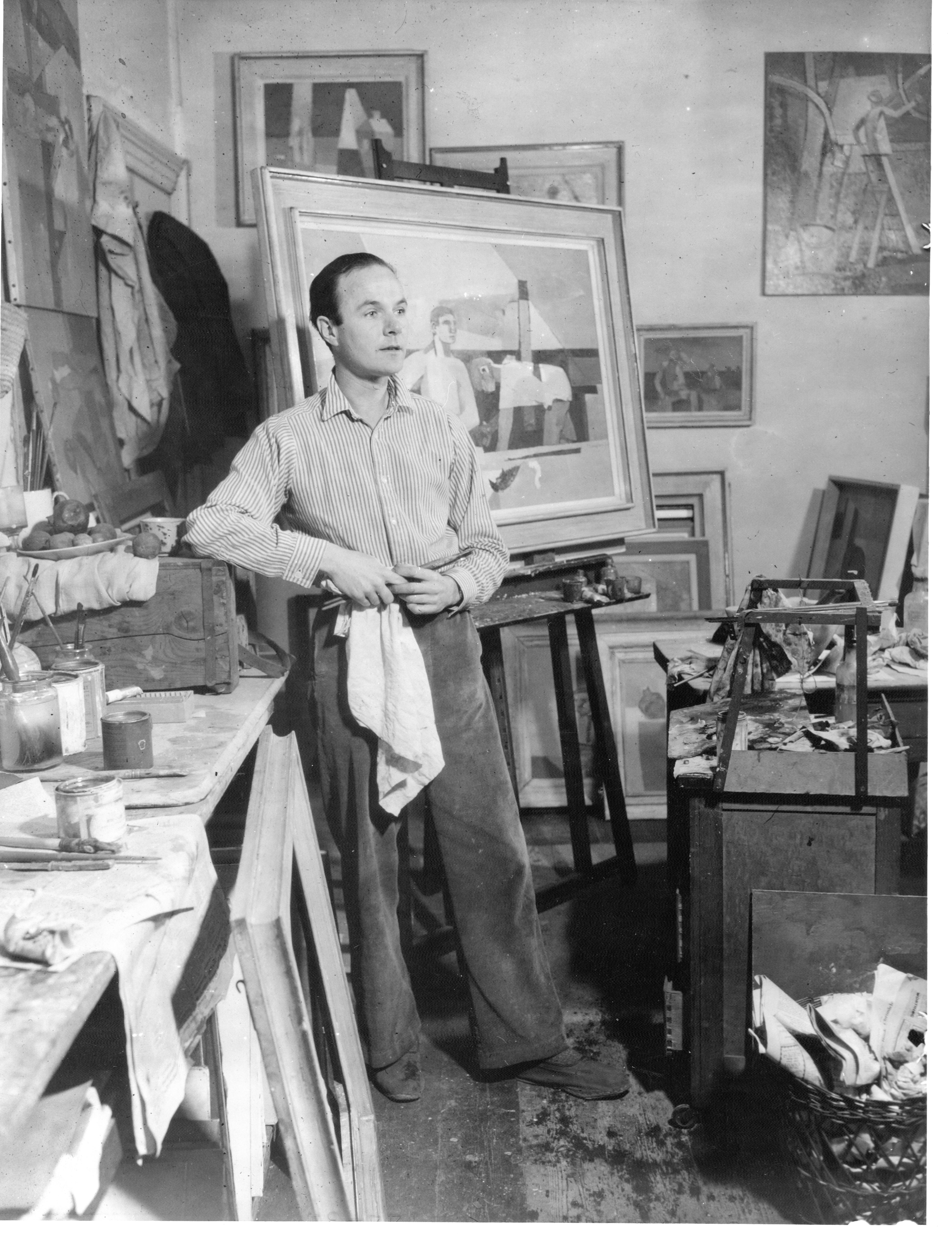 The difficulty of saying anything about one’s aims as a painter is rather similar to the difficulty I always experienced as a child when confronted with that question – so beloved by adults – ‘and what are you going to be when you grow up?’ In the first place I usually had not realised, being so fully occupied with the experience of being a child, that I should have to grow up. And in the second place the attraction of any one thing I cared to name was instantly dimmed by the thought of all the other desirable things that choice would necessitate renouncing. Of course I could always name many things I did not want to be, and so now it is always easier to talk about what one us not trying to do than about what one is. Indeed it is only necessary to mention any of the contemporary ‘schools’ of painting – abstract, Surrealist, English Romantic, etc., for me to feel quite unable to belong to any of them. Each has something to offer, something on which one can build, but none seems comprehensive enough to include all one’s aspirations. Aims and their fulfillment, in painting, are concerned, after all, with vision. They are conceived in silence and executed in silence. Some artists can live and work better as members of a group with constant interchange of ideas and doctrinal justification of their efforts. For better or worse I find myself to be one of those who gropes his way alone, relying on nothing more than ‘his little sensation’ as Cézanne called it. And amidst the vast artic freedom that reigns over the whole of painting today, it seems to me to be the only sure thing one can cling to.

Like many other painters today I find the impulse to paint comes from within me rather than from outside; from a deep-seated need to realise one’s own self, rather than a desire to affirm or describe what already exists outside. The outside world, or nature, furnishes the material for that realization and also the common language through which one hopes to communicate with others. And since in any case one exists only as a receptacle for the forces and events outside oneself, it comes to much the same thing in the end whichever way one works. One might perhaps say that one’s aim is to paint a picture, which is as a mirror to one’s own soul. A mirror, which could give back a true and unclouded image of one’s innermost self.

‘If you feel strongly enough about a thing you will find the way to express it’, a friend once said to me, [Graham Sutherland], ‘but the thing is to feel strongly.’ But one can feel strongly about things in ways which have nothing to do with painting. One can feel strongly in a physical, moral, or merely sentimental way, and indeed one needs to be exceptionally simple-minded or exceptionally well insulated from the life of today to become wholly absorbed in the look of things. But to be a painter it is necessary to transport all one’s feelings into visual terms, even quite private feelings.

As I look out of my window across the garden towards evening, the upturned surfaces of the leaves seem to become brighter as the sky grows darker. Each leaf becomes a tiny mirror to the sky, stretching out to hold as long as possible the cool violet light that falls on it. Between the thick inner branches the sky is visible also, a deeper, more intense blue, cut up into small irregular shaped pieces by the interlacing branches. Presently one gets the impression that the sky is really inside the tree, enclosed by it and at the same time surrounds it.

With a sudden violent agitation of the leaves, like the scattering of a tray of jewels, someone is reaching up to gather a low hanging fruit. Some of the violet light pours off the leaves on to their upturned face, part of their face is green where the light is filtered by the leaves, at the same time it is also the colour of flesh and blood. It is warm but the tree is cold. The line made by their up-reaching arms is the same as the line of the down-reaching branch. The articulation of the branch in the tree-trunk, and the folds of the shirt round the arm-pit are the folds of the bark round the tree joint. Hands are like leaves. The taut, tight curve of the spine is only warmed and more human than the curve of the tree trunk. Each part of the one is interchangeable with the other, yet the harmony is achieved without losing a shred of separate identities, the one human being, the other a tree in the garden.

It is this sense of tenseness and wholeness which I want to express in my painting: the absolute harmony which results from the simultaneous interdependence and antagonism of objects of different natures; the stability which results from perfect balance of movement.

The paradox is most clearly stated for me in situations which have as their main theme a figure in a landscape. Two entirely complete, complex living organisms which, without loss of identity, without sacrificing the essential reality of their natures, have to be reconciled in one whole aesthetic unity. Consequently I find myself returning, as a leitmotiv, over and over again to subjects of this nature. Indeed it is hard to find a subject in which to some degree, the paradox does not exist, even an apple lying on a table. The variations are endless, and with each new attempt one brings such experience and knowledge as has been gained in the meanwhile. The problem remains always the same – to put it in technical terms, it is to find a form which, at one and the same time, describes the essential reality of the thing in question and also fulfills its function as a unit in the construction of the painting.

Of course one does not often succeed. Failure to maintain this dual state results in one of two things. If ones awareness of the identity of the object slackens, the form becomes generalised, geometric, the structure of the painting too perfect, the picture decorative. Or if this same awareness is allowed too much liberty, no cohesion at all takes place. The painting remains a sum of isolated statements.

I mentioned just now the need of finding a form. This seems to me a very different thing from inventing a form. It is much easier to invent a form, which serves only a decorative or at most a structural purpose. Whereas only those forms discovered by analysis of nature, or in a state of imaginative awareness of nature, have real significance and vitality.

In my own case I am more disposed to work from an imaginative recollection of the subject than by analysis of the object in front of me. Each method had its own particular difficulties. Some, such as getting several people to stand knee-deep in water beneath trees in some isolated spot of the country side, whither one has also transported canvas, easel, painting equipment, etc., being insuperable. So the method is partly dictated by circumstance. But whenever it is possible to have the subject at hand, as in the case of a still life, or a figure at a table, I prefer to do so even though I hardly look at it while I am actually painting.

On good days I like to start painting directly on to the canvas without any notes or studies, in this way the full intensity of the idea is brought straight into contact with the medium without being dissipated through preliminary drawings. This entails a certain amount of anxiety in the early stages owing to the length of time the canvas remains in a state of chaos, and the necessity of maintaining against this a clear sensation of the goal one is aiming at. At the same time I find by this method that a painting retains a certain vitality through all its stages, and a sense of excitement and adventure. Sometimes I like to start two or three canvases of different sizes at more or less the same time, all directed towards realizing the same idea. In this way one can be built up against another, and discoveries made in one can be made use of in another and so on. When a section becomes difficult to resolve, it is then that I like to refer to notes and studies made from nature in the hope of finding a clue. Or better still to go for a walk with ones head still full of the problems on hand, so that one has an eye only for those things which might be useful. In this way too one can keep a constant check on the reality of what one is doing.

Ideas for paintings come at various times: when walking about, just before going to sleep, or when actually working. The important thing I find is not to wait for ideas. There are so many, and they follow each other with such rapidity at times that one could easily spend all ones time just thinking about it, and the moment when one felt ready to start would get more and more difficult to approach. ‘Good’ ideas seldom make the best paintings: they are too good as ideas. Often it is quite small ideas, rather unformed, which serve the best because they grow up and take shape in the process of painting and so are inseparable from it. But really it would be more accurate to talk of sensations rather than ideas at this stage because the idea is usually only apparent when the work is finished. The sensation is what matters.