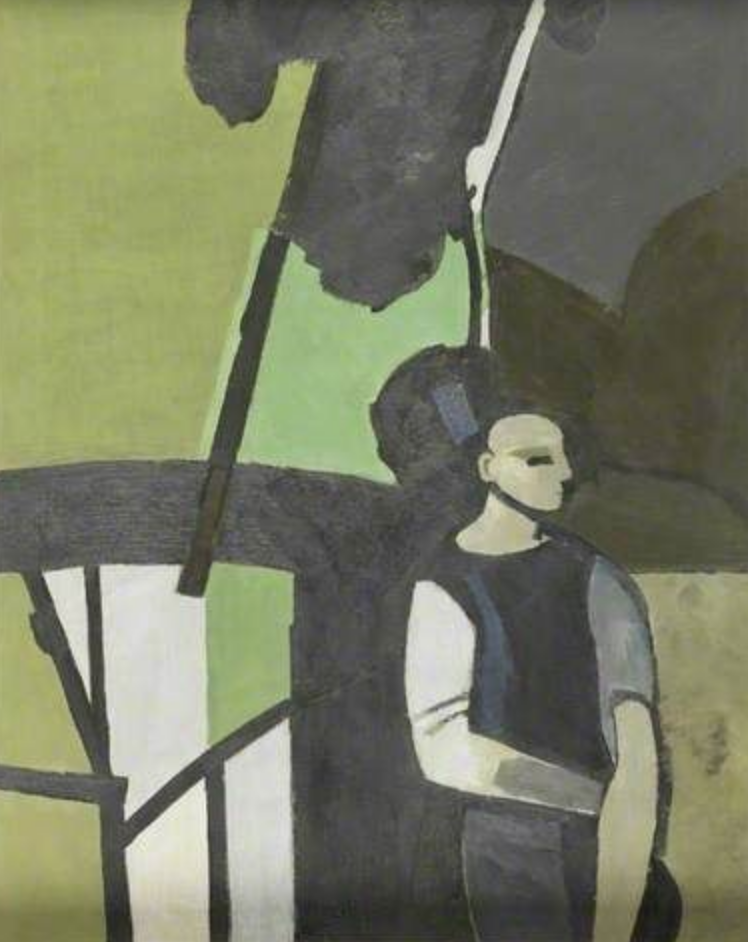 If a critic wants a reputation for soundness, he should never use a superlative for one of his contemporaries. However, Keith Vaughan’s new exhibition of landscapes and figure paintings at the Leicester Galleries is superb. There are broader, more ambitious, more original (to use the adjective of the bitch-goddess) artists alive today than Vaughan. But in this show of thirty oils there are twenty canvases communicating visual sense and experience, complete and consistent, and for which anyone with an eye can only be profoundly grateful.

Vaughan has developed slowly learning mainly two things: how to compose, and how to find in the male human body the ship, the tree, the animal, the cathedral, the man, that awaits discovery there – and it is deft, patient discovery that each of these awaits, not, as some anarchic artists believe, blasting total liberations. For that can only destroy both the whole and the tentative possibilities of all the other images. The word compose means something rather vague and small by itself. The bigger the swing of the gate, the stronger the post, and the clearer the ground around it must be. Every square-inch of the surface of a picture is like a gate, sometimes almost static, sometimes swinging 90° right into the picture. The posts and the ground from which these gates swing are invisible, but they must be consistently reckoned with in the way the whole picture is arranged. In a badly composed picture, the gates fail as their weight pulls them off their hinges. In a well composed painting – and this image of the gate was directly suggested by Vaughan’s new pictures – everything, literally, opens and shuts.

Vaughan started off as a romantic painter concerned with atmosphere and the evocative human gesture. More recently he has experimented with the Cubist analysis of planes and forms. In these new pictures the two aspects combine. They have a little review element of mystery, but by virtue of their hard, pared-down drawing and composition, they also have great formal calm. His Woodman in Clearing evokes the same kind of combination of emotions as Giorgione’s Tempest.

More specifically, the visual excitement that Vaughan communicates is of two kinds. In his figure paintings (Lazarus or the bobbin-like Bather from which the light is wound off as he invisibly moves) he is concerned with visual metaphor. That is to say that he wants to show how a small plane, falling in the hollow of the collarbone, is identical in angle and direction to, say, a plane that rises, slightly on the inside of the thigh to the kneecap, a = a. But the equals sign that connects them hasn’t only a geometric validity; it also represents the indivisibility of all the nerves, impulses and desires of the entire body. The miracle, at which Vaughan wants us to marvel, is that during every fraction of a second that equation is adjusted in order to remain true.

In is landscapes Vaughan is concerned with something even more difficult to describe verbally. He wants to emphasise how the masses and planes of the buildings, trees, hills, of a scene are subject to the same unifying laws – such as the force of gravity: that they come together rather than fly apart: and, at the same time, that it is the light that appears to aid and keep moving this centrifugal unity – as though it were the light that turned the windmill. To achieve this poetic vision – and Vaughan does – is technically very difficult, but it means combining the most sensitive, direct tonal observation with formalised structure; it is like being simultaneously concerned with the turning mechanics of a millwheel, and with the way the light is reflected in the drops of water as they fall off each blade.