CONSIDERED FROM A SCULPTOR'S PERSPECTIVE 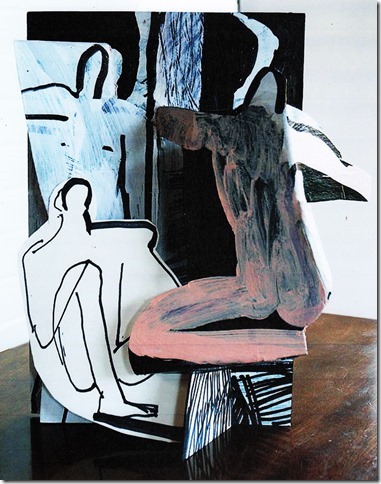 Keith Vaughan emerged as a commanding figure in British art during the post-war years. His early training as, what was then fashionably called, a commercial artist sowed the seeds for his later, extraordinary draughtsmanship and compositional daring. His interest in the male form was evident from the beginning. Reconciling the three-dimensional human figure within an interior space and – most challenging – a landscape, became the subject of his finest work. Although other artists were later to pick up on this theme, it was Vaughan who led the way in Britain. As a sculptor, I have always been fascinated by his approach to depicting the object in space, interlocking figures and the highly sensual and tactile quality of his paintings. He solved various problems of translating three-dimensional forms into a two-dimensional medium while dealing with the male figure and, in doing so, has informed and contributed to my own work as a sculptor.

When charting unknown territory there are bound to be early influences. Paul Cézanne and Graham Sutherland, of course, stand out but, to a large extent, Vaughan was self-taught as a painter. It is worth noting that some surprising parallels exist between Sutherland and Vaughan. They both began their careers in the commercial design industry and subsequently followed a path to establish independent pictorial languages as artists. They both ‘dabbled’ with the idea of sculpture and made a few small-scale pieces. Both explored three-dimensional objects in space in their paintings. It was landscape which exerted the biggest influence for Sutherland: gnarled, twisted forms, thorned and barbed undergrowth writhing in light and dark spaces, infused with acid greens and sulphurous yellows. In constructing his compositions, Sutherland relied upon line to describe the forms and also the broad sweep of land mass. The beginning of the 1940s saw Vaughan adopt a similar approach. To define form with just line, as he did at this time, is very much the choice of a sculptor. His figures, often in related pairs, were depicted in woodland, orchard or beach settings. Here Vaughan found no shortage of spiky, angular forms amongst which a drama between the male figures could be enacted. These sculptural forms may easily be read as metaphors for the hostile, natural world. Strikingly, there is no attempt at this time to model the figure, partially or fully in the round.

However, during the 1950s Vaughan had a tendency to do just this. The profiles of his figures become less angular and more fulsome. Very often single figures are set against a stark background. There is a yearning for a classical grammar. One has to remember that Vaughan was erudite and keenly interested in classical music (often reflected in some of the titles he gave his paintings). During this period he was a visiting artist at the Slade School of Art and would, when duties allowed, visit the life-room and the cast court to draw from the three-dimensional figures there. These studies are predictably ‘academic’ but they do show his concern to model the form: searching for profiles with tentative strokes and cross-hatchings to achieve the volumes and masses. Paul Cézanne, too, used this method and was much admired by Vaughan. It is worth looking at Vaughan’s Nude Study 1951, which is painted with oil on board. It is a three-quarter length, frontal male nude. The right hand rests on the hip and the figure is positioned against a dark blue background. The profiles have been worked on several times in the manner of a sculptor, searching for the proportion and weight of the limbs. The main mass of the head and torso have equally been painted over, the paint being applied in hatched blocks of colour. There’s a hint of the tessellated surfaces of colour which were to emerge later in other figure paintings.

During the 1960s Vaughan was at his most vibrant and daring. He began to use less recessive space, as the foreground and background become interlocked. This strange and weird anima allows the painting to change under one’s gaze. D. H. Lawrence, writing about Cézanne, described how he:

…set the unmoving material world into motion…to satisfy his intuitive feeling that nothing is really statically at rest…and to fight the cliché which says that the inanimate world is static. He denied that walls and chairs are still, in his intuitive self he felt for their changes.
(D. H. Lawrence, Cézanne: Introduction to his Paintings, 1929)

These words could equally apply to Vaughan.

During this period Vaughan produced a series of paintings where the separate figures become more intimately related with one another, welded together into a single ‘corporate form’. This can be seen in works such as Group of Figures (1961). In conversation with Bryan Robertson in 1964, he talked about some of his paintings that attempt to do this:

There are crowds making a single corporate form…jostling and pushing when every contour has an abrasive action on every other contour (Studio International, November 1964).

One could be forgiven for thinking this is a sculptor speaking. Many of Vaughan’s ‘Assemblies of Figures’ and their related drawings and gouaches, explore the way in which the contour lines break up, re-form and interlock with adjoining shapes. Every artist depends on certain formal intuitions. Vaughan, in particular, endowed his paintings with their own, inner vitality to achieve an integrated harmony. This process demands aesthetic stamina and mental acuity; there were times when he felt the strain of the inventive process and would abandon creative work to spend some time performing more mundane tasks such as and organizing his studio cutting window mounts. It is tantalizing to think what planar constructions and sculptural forms he might have assembled from the offcuts of card, had he felt so inclined!

Constructing sculpture from interlocking planes was a technique British sculptors were exploring during the ’60s. This ‘break through’ came when the sculptor Anthony Caro returned to London from a visit to the USA. He was fired up by the possibilities that welded mild steel might bring to free-standing forms, liberated from the plinth. This led to an output of unequivocally abstract sculpture. Although he came close to total abstraction, Vaughan could never abandon the last vestiges of subject matter; landscape and the male figure were to always remain with him, inward longings casting their shadow over outward appearances. His figures, nevertheless, were becoming flattened shapes, at this time. Perhaps this is more evident in his gouaches than in his oil paintings, where forms occasionally float in a reverie of nocturnal settings.

Sometimes there is enough information to translate Vaughan’s drawing and painting into a free-standing sculptural maquette. One can only conjecture what he would have thought of such liberties. But ‘art without a trial disappears at a glance’ (Philip Guston, Arts News Annual, XXXI, 1966), and Vaughan constantly put himself on trial.

Vaughan’s final paintings explore new territory with the language of paired-down, geometric shapes, something he might have gone on developing. They seem to have eschewed the human figure, leaving only a spare and bleak environment – and a landscape-journey not so far away from Schubert’s Die Winterreise. The last entry in his journal quite clearly demonstrates Vaughan himself was about to embark on such a journey: ‘…from a place I came that was never in time, from the beat of a heart.’ (Kathleen Raine, quoted in Unquiet Landscape, 1990)