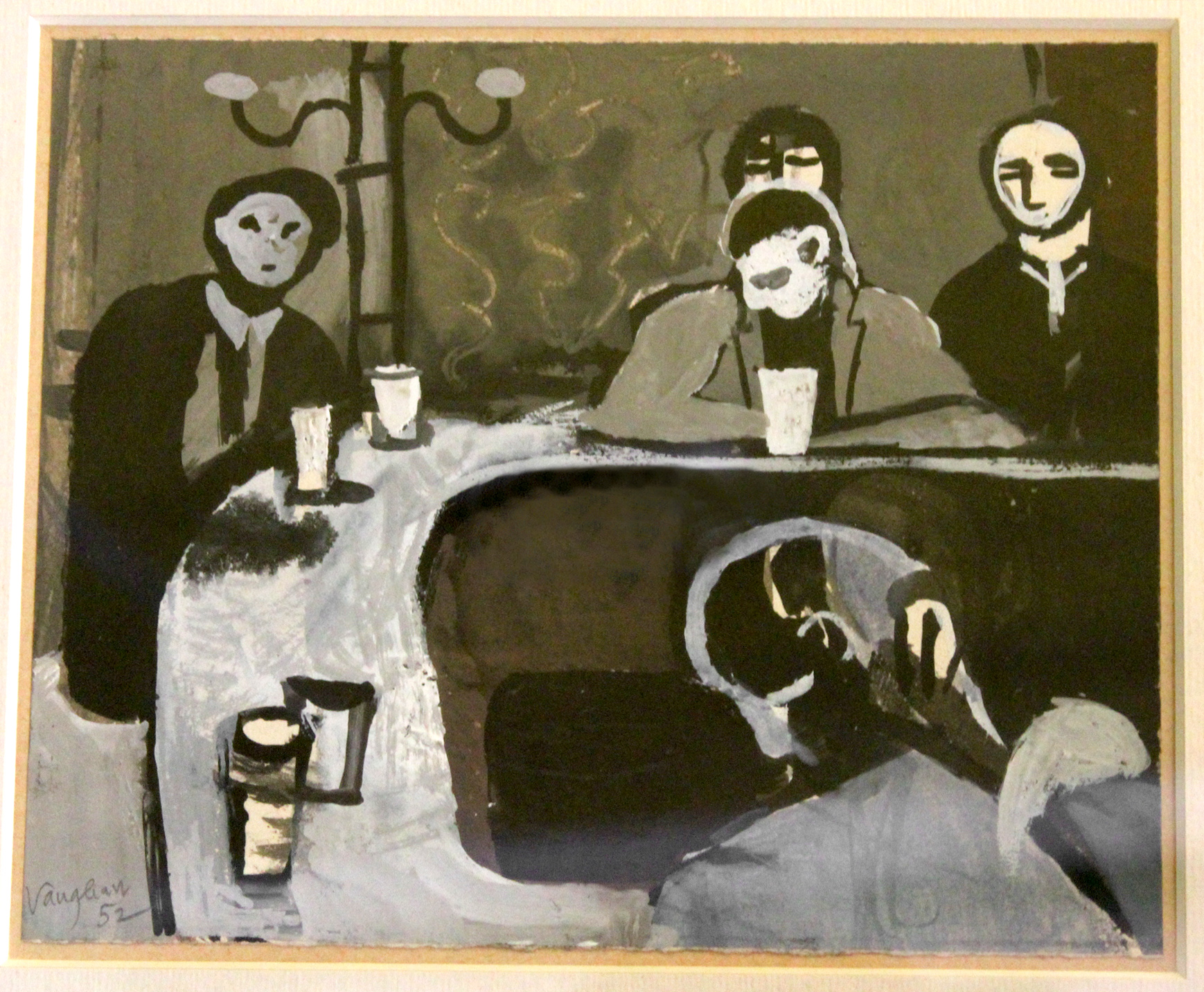 We used to go to County Cork in Ireland for summer holidays and stay in a little coastal spot called Carigillihy. There we met Bob Gosling and his wife Veronica Henriques, who it later turned out had known Keith Vaughan and owned a fine collection of his paintings. Bob (d. 2000) was a distinguished psychiatrist and psychologist and became head of the Tavistock Clinic in his later years. Veronica also painted and had a very original talent for three-dimensional art too. Bob was an executor of Keith Vaughan’s estate after the latter’s death.

This fired my interest in Vaughan and led me to buy from Agnew’s one of his 1952 gouaches entitled The Bar. Later, by chance, we visited an annual antique fair at Olympia. I had already, by then, bought and devoured the moving Alan Ross edition of Keith Vaughan’s journals. Imagine my surprise at finding the fair had selected Vaughan as the artist of choice for that year’s artistic corner. Among other works was the large oil painting for which my gouache had obviously been a trial design. More, though: under a glass case there was Vaughan’s original manuscript of his journal, open at the final page where he had downed the whisky and pills and his hand-writing finally petered out…almost, it seemed, as if the ink still shone.

I was at the time putting together a first collection of poems later to appear as Chasing the Hoopoe (published by Peterloo Poets, 2005). Keith Vaughan’s quirky entry into my life seemed to demand the attempt at a longer poem. I sent it to The Guardian and heard nothing for months. But one day they rang me and said they wanted it for the coming weekend: True Confessions – William Boyd on the Journal-Keepers was their cover item for that ‘Saturday Review’ (8/3/2003), and Keith Vaughan was one of six great names he had chosen to write about. I had to accept some cropping of the poem for reasons of editorial space. But I thought the ghost of Keith Vaughan might perhaps let that pass! Here is the full version:

COLLAGE
(After the journals of Keith Vaughan)

Study in gouache: five ghostly figures
of gun-metal grey, blue and black sit frozen
in shared foreboding. Years after I bought it,
the full oil appeared at his retrospective,
beside the last manuscript page of his Journals,
4 November 1977…

He was quite alone in his twenty-seventh year.
The War threatened extinction, writing became
a non-combatant’s alternative to what
remained of living. The painter’s eye would fix
vanishing moments: as in the violet air
dust rose from the ploughboy’s straining horses,
blowing like a white scarf down into the valley,
and the low sun filled the hollows with mist;
or when the wounded train crept in from France,
engine sighing on the buffers, and they offloaded
bone and flesh and bandages through the night,
till it lay in the morning light like a picked carcass.

That year, his brother was shot down and killed
four days from their casual parting in Trafalgar Square,
just at the point when they could have become friends –
their 12/50 Alvis stripped down on the kitchen table,
their drives to the Welsh coast, the tinned pilchards
slung under the exhaust to warm.
Now silence splintered
like night at the cock’s crowing.

In Guildford gaol, to ward off claustrophobia
he drifted on a tide of Proust; ‘Love to any
young cocky placed in this cell’ read the graffiti.
For painting a wartime trench in a Surrey field
they fined him £25, plus confiscation;
propped on an easel in Court, this picture was
his first to be exhibited in public.

The months and years clicked on like lantern slides:
dubbin, fatigues and canvas; nomad’s land –
Ilfracombe, Codford, Keighley, Belper, Leeds;
one moment soft hay and pink chestnut blossoms,
the next a village strafed and fourteen dead.
Interpreting for prisoners of war,
words failed him when they sang their Stille Nacht.
The curtains of his past and future drawn,
‘perfection of the life or of the work’
was a choice denied him, he preferred to hold
that great art always offers, through a flaw,
a point of weakness where the heart can enter,
as in Bellini’s ‘Agony in the Garden’.

When VE Day came and the flags were perched
like some new flock of rare or fabulous birds,
he sat and watched the sheep graze, as they’d done
for centuries past in Thrace and Galilee.
The Flying Fortresses flew over low,
unloaded. Then he knew the flags were real.

No flaw in Avignon’s Palace of the Popes:
instead, he watched boys swimming in the Rhone;
a jealous Zeus to all young Ganymedes,
he chased the sun those early post-war years
in Cuernavaca, Taroudannt and Venice,
fleeing the gloom like Theseus whom he painted
for the Festival of Britain 1951.
Surreal humour flecked his visual palette:
pink pigs burst from the black earth like truffles,
as Greyhounds bussed him towards Omaha;
in Rome he marvelled at the riper vintage
of marbled genitals on the Campidoglio.

The interlocking of the human form
with what surrounds it, wrestling with wrestlers or
the empty landscape highly charged, bombarded
to fuse a new image, this remained his quest
as The Whitechapel crowned his fiftieth year
and other public recognition followed :
the honours list, the Royal College, Slade,
rich harvest for his art, his sun at zenith.
He only said the higher you go, the more
you leave the loved behind. A lost child’s cry.

By the next decade he was mere survivor,
unloved. Unlived, the years were slipping away,
his friends dwindled and could not redeem him
from the sad mechanics of solitary drinking
and self-consuming sex that filled his diary,
into whose pages entered now, half welcome,
the recurring figure of Death, presaging cancer.
Poulenc’s Les Biches still brought brief happiness,
music he knew from childhood like the taste
of his own tears; and if God had an image
to kneel before and worship, his would be
the face of the Egyptian boy king
Tutankamoun, gold mask with onyx eyes,
austere encouragement to go on trying.

‘A sunny morning full of life’ he wrote,
‘the capsules have been taken with some whisky…
…ready for death though I fear it’. His final
words ‘It wasn’t a complete failure, I did some…’ –
and here the printed text ends, marked [illegible].

But looking at the manuscript itself
under the glass case in that exhibition,
his dying hand was clear enough to me,
though faltering: ‘I did some.. good work’.