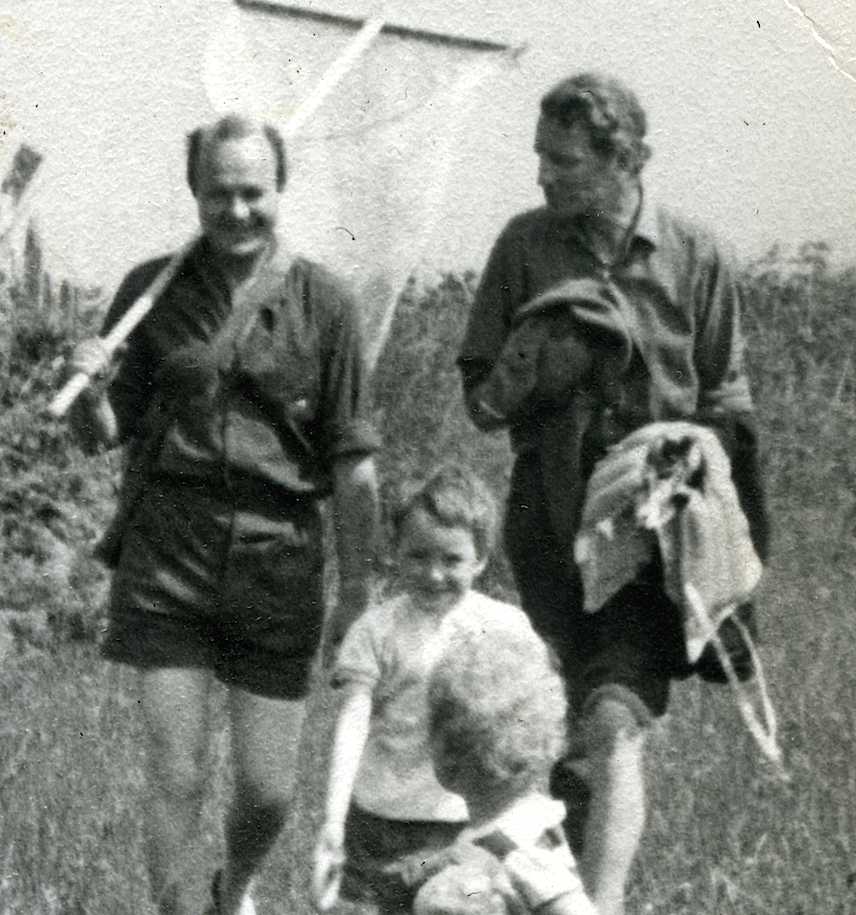 Vaughan on Holiday in Wales with the Gosling Family

Keith Vaughan was born in 1912. Because of the early defection of his father he was thrust prematurely into the role of being the man of the family for his mother and his younger brother, Dick. The latter went into the Royal Air Force and was killed in 1940 at the age of twenty-five; his mother lived on into her nineties in impressive and often overwhelming vigour and died only last year.

Feeling anything but at home in the commercial world he had fallen into on leaving Christ’s Hospital, his life in the Pioneer Corps gave him security of a sort and a framework of relationships that allowed his interests in photography, drawing, painting and writing to take root, first as a purely private and tentative preoccupation, but later as a widely acclaimed and assured accomplishment. The first extract from his journal was published by John Lehman in Penguin New Writing in 1940 and was followed years later by a much more extended and all richly illustrated extract published by Alan Ross in 1966.

Despite being in the same generation of post-war figurative, abstract and expressionist painters, and despite living in the same house as the tumultuous Johnny Minton, he worked out his own personal and thoughtful style that was little influenced by anything that was going on round about him. Even trips abroad to places of great visual stimulus had always to be transmuted via his notebooks and sketches to paintings that in fact emerged from studios in either Hamilton Terrace or Belsize Park. His first exhibition was at the Lefevre Gallery in 1942, but there have been many, many more since then and in many parts of the world. There must be countless thousands who know his paintings and have been unforgettably touched by them.

Despite being self taught and nobody’s protégé, at the Camberwell School of Art, then at the Central School and for the past twenty-three years at the Slade, his teaching has impinged on many generations of students, either positively or negatively, as a guide or a warning, as a technical assistance or as a most articulate critic. Having never seen himself in any sort of mainstream, his own work grew from an internal compulsion that was forever being reconsidered. The work of his contemporaries and his students, he saw as being interesting and often intriguing products of other peoples’ minds, in later years somewhat alien and largely incomprehensible. He was made CBE in 1965.

A little over a year ago he found that he had cancer and this stopped him in his tracks. He went through with the inevitable surgery and radiotherapy but became increasingly depressed and quite, quite unable to work. In the end he decided that the stagnant days and the blank prospect before him made living a life of quality no longer possible. He died quietly in his studio, as ever working away on his journal.

He was a passionate man who held most of himself private, contained and reasonable. Only occasionally did his vehemence break out in irritable intolerance or in wild romantic love. For those of us who knew him well he was a companion for all seasons and one who almost, despite himself, betrayed himself as someone of great affection; he enormously enriched our lives with his sharp wit, his uncompromising frankness and his love. His companion through so much of his life, Ramsay McClure, and his redoubtable supporter, particularly in later years, John McGuinness, must assuredly be first in our minds at this sad time. For the rest of us we mourn the loss of our old friend, our teacher, and the artist, and we are thankful to have known him and to be here today to say goodbye to him.