SOTHEBY’S MADE IN BRITAIN SALE 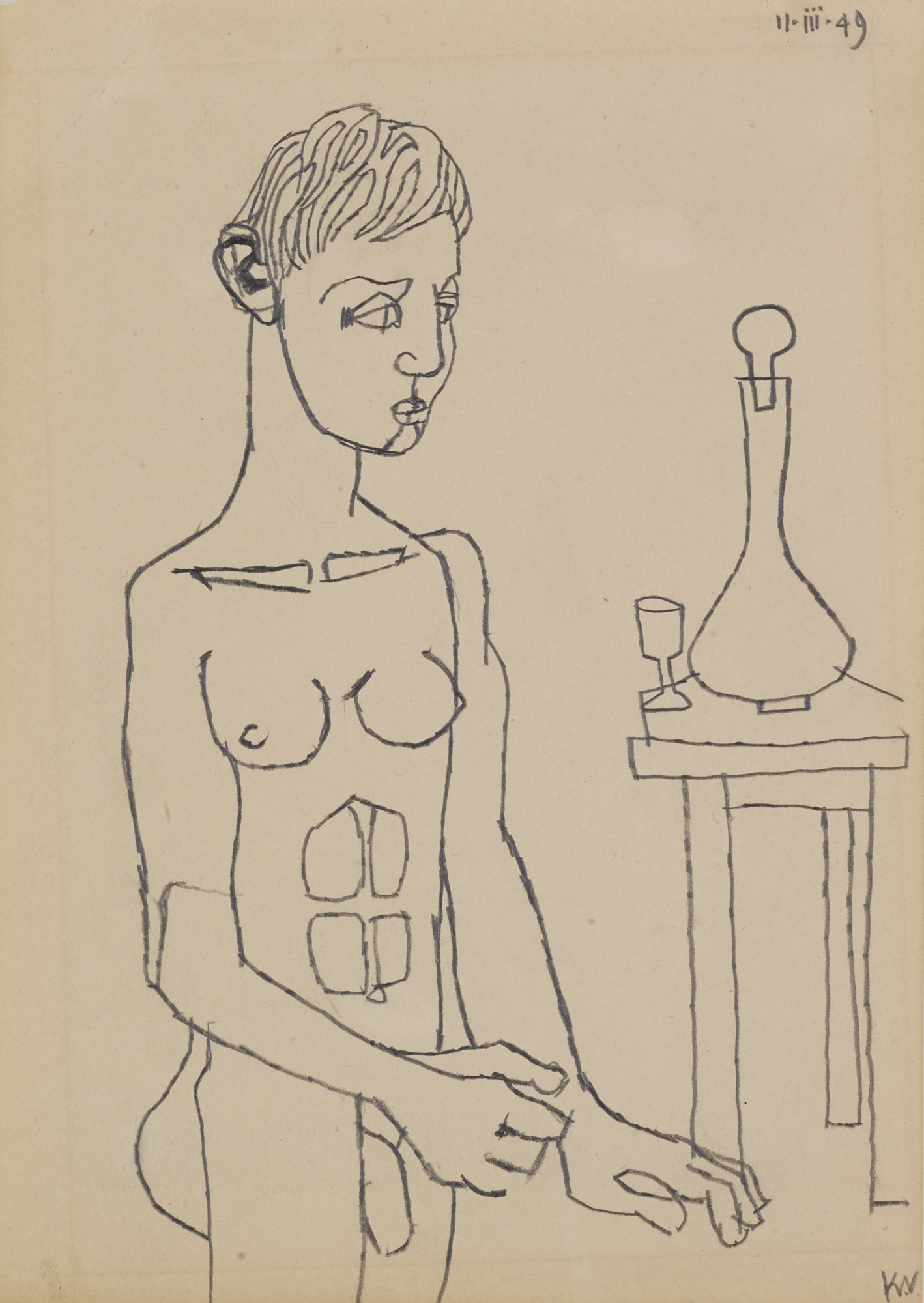 There are three Keith Vaughan drawings coming up for auction in the forthcoming ‘Made In Britain’ sale at Sotheby’s New Bond Street, on 5 April 2017:

Vaughan’s essential aim when drawing was to capture the essence of his figure subject. His pictorial challenge was a formal one: how to arrive at a visually satisfying statement without resorting to mere illustration or illusionistic reproduction. The solution lay in making a paraphrase, rather than a comprehensive reproduction, of nature and drawing played a crucial part in this process of pictorial reduction. He cultivated a particular quality of line to delineate human forms and suggest corporeal volume; it is serrated, almost nervous and made with jagged strokes of the pencil. Drawing enabled Vaughan to reveal the fundamental character of a subject and refine his picture-making process.

Their friend the painter, Prunella Clough, presented this drawing to Professor Ball and his partner Dr. Gordon Hargreaves. She related to them that on March 7, 1976, one year before Vaughan died, she invited him to Sunday lunch with the art critics John Russell (1919-2008) and David Sylvester (1924-2001) together with the painter Francis Bacon (1909-1992). Vaughan’s mother had died the day before and, despite this, it had been a highly sociable occasion. In a surprisingly ebullient moment, Vaughan had made this drawing in front of them all at the dining room table. Inscribed on the reverse are the words: “John Russell, Francis Bacon and David Sylvester (with sagging droopy buttocks and wrinkled socks), Keith at Prunella’s March 7, 1976.” The figure of Bacon, in the centre, appears stocky and thick-set. He and Vaughan knew each other quite well and, at one time or another, are known to have mentioned their admiration for each other’s work. Both artists represented the male nude in their paintings and also resolutely refused to let go of the object to enter into complete abstraction.

Drawing was an essential part of Vaughan’s creative process. While working at the Central School of Art (1948-58) and later at the Slade (1959 onwards) he made life-drawings, such as the present work, to assist in his teaching process. There were several exhibitions of his drawings during the 1960s: he exhibited some at the Biennale in Sao Paolo in 1963 and three further drawing exhibitions took place between 1967 and 1969 in London and Manchester. While teaching at the Slade (1959 onwards), Vaughan continued to make life-drawings with his students. Noel Barber noted that Vaughan “draws on the spot as an aid to concentrated observation. Even when he visits the National Gallery to look at an old master he takes a small sketch-book out of his pocket and makes diagrammatic memoranda. ‘How long can one look at a painting,’ he asks, ‘without one’s attention wandering to paintings nearby?’ And he himself answers, ‘About twenty seconds.’ Drawing memos enables one to look longer and more intensely. Likewise he paints nudes from memorised observation. Once or twice a month a model poses in his neat working-room…. The model’s appearance enters as it were the artist’s consciousness in the form of drawings.” (Noel Barber, Conversations with Painters, Collins, 1964).